The demo "Cadaveric Splatter Platter" also followed in along with "Grotesque Putrefied Brains" which was the last release to feature Jake since he left the band. He was replaced by Mark Smith vocals and Matt Widener bass. Marks stay was short and he was replaced by Ross Sewage. In the sixth demo, "Horrific Expulsions of Gore", was released. It was followed by the live split, "Deterioration of the Senses", with Haemorrhage.

After this Matt Widener left the band but Ross took over his bass along with vocals. They then released another split, entitled "In the Name of Gore", with Hemdale. Several line-up changes and more 7" splits with various bands were released throughout the years. In they finally released their first full-length album, "Gore Metal" through Relapse Records.

The compilation album "Platters of Splatter", which included almost every song made by the band, was released in The band also appeared at the Wacken Open Air festival. The band evolved further with their third album, Anatomy Is Destiny , which added more sophisticated arrangements, production and instrumentation.

Bassist Leon del Muerte replaced Bud Burke soon after the album was recorded. Harvey described the album as "a big step forward", [6] but retrospectively criticized the album for its lack of memorable choruses. Co-founder and drummer Col Jones departed Exhumed in , which affected the creative chemistry of the band. Harvey recalled, "After he Jones left it was a big adjustment. I was trying to run shit on my own creatively and logistically.

The anatomy of the band just dissolved and everything fell apart. Exhumed then completed recording an album of cover songs titled Garbage Daze Re-Regurgitated.

Harvey later recalled:. I was pretty burnt on Exhumed. During the hiatus, Harvey played in Dekapitator, Gravehill, and Scarecrow. In an interview conducted shortly after announcing that Exhumed would reform, Harvey remarked that "After a few years off and away from the death metal scene, I feel rejuvenated and ready to hack, maim and kill once again. I wanted this to be a continuation of what the band was doing and was on its way to doing, not a reunion or some weird nostalgia thing.

In , the band recorded All Guts, No Glory. The album line up was Harvey on guitars and high vocals, del Muerte on bass and low vocals, Caley on guitar and Danny Walker on drums. In , guitarist Caley was replaced by Bud Burke, [11] and the band recorded Necrocracy , [12] which was released by Relapse Records on August 2, Main songwriter Matt Harvey said:. 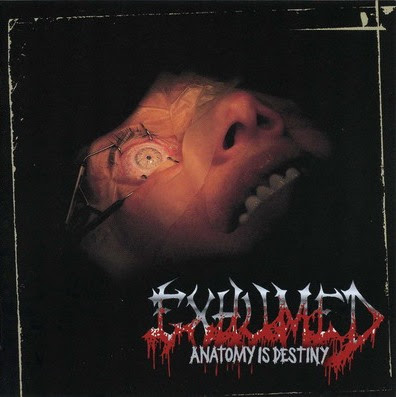