Fastest delivery: Oct 16 - Play as your favorite team - 20 different playable teams to choose from. Featuring voice acting by the U. TV show cast 4-player multiplayer action - Explore with and battle against 3 of your friends simultaneously. Frequently bought together. Add both to Cart Add both to List. Customers who viewed this item also viewed. Page 1 of 1 Start over Page 1 of 1. Zatchbell Mamodo Battles - PlayStation 2. Inuyasha - Feudal Combat - PlayStation 2. Zatch Bell: Mamodo Fury - Gamecube.

How are ratings calculated? Instead, our system considers things like how recent a review is and if the reviewer bought the item on Amazon. It also analyzes reviews to verify trustworthiness. Top reviews Most recent Top reviews. Top reviews from the United States. There was a problem filtering reviews right now. Please try again later. Verified Purchase. I was unsure at first since i was getting a video gane at a good will store but the game was in good condition and works like it should so i was satisfied and glad i made the purchase for the cheap price.

Everything worked great with the game. One person found this helpful. My kids like this game, their only criticism is that there are not enough players. See all reviews. Customers who bought this item also bought. Area 51 - PlayStation 2. Pages with related products. See and discover other items: bandai namco games , namco bandai , anime video games , ps2 multiplayer games. Learn more about Amazon Prime.

Get free delivery with Amazon Prime. Back to top. Get to Know Us. Amazon Payment Products. English Choose a language for shopping.

The strikethrough price is the List Price. Savings represents a discount off the List Price. Switch to Zatch for a few seconds and knock Kolulu down, then switch to Kiyo and hit Lori, if needed. Battle 1: Slightly difficult, as practically everything around you can be destroyed.

This may take you a try or two to win. Jikerdor, the 3rd spell on your spell bar, will stick the opponent to anything metal in the area, as long as it hits.

While Fein or his partner is stuck, attack the other opponent. If attacking Fein, cast spells, if attacking the human, try to swat the book away. You have to stop Eshros from destroying the building, but really all you have to do is keep their attention from the school until time runs out. Please take that tip, and try knocking the book away when possible, as usual. Battle 2: Not that bad.

Keep this up, maybe use Jikerdor if needed, and this battle will be yours. Also, one of his spells will just blast rocks at you. Just watch their shadows, simply run out of the way, and continue the Zaker casting. Basically, just attack him like normal. Battle 2: The description for this one is kind of strange. Oh well. Basically, instead of attacking them, try to blast at the boxes, shelves, and anything around you. Use Zatch by himself, quite a distance away from what you want to hit, and use Zaker.

Just follow and Rashield. If Tia gets hit, it counts as you being hit, so be careful. When this happens, stand still, switch to Zatch, charge up your spell power, and go back to Kiyo and Rashield casting. Battle 2: They like to hide behind the semi-truck with Megumi on it. Also, watch out for his most powerful spell "Ri Goron", I think. It sounds like that, anyway. When you hear it, DASH. If possible, hide Kiyo and run Zatch in front of them, then switch back to Kiyo and cast Zakeruga and Zaker as much as possible, as Zatch aims better when computer-controlled and away from Kiyo.

First off, find the doors on the side of the room you can go in, the place with stairs that lead you to the balcany. Hide Kiyo on those stairs, and go as Zatch. Here comes the hard part. The first thing he does is jump, so RUN. When he lands, a huge shockwave will cover the floor, so get as far away as possible. Target whenever he pauses. Strategy 2: Hide Kiyo on the stairs, but take Zatch up them.

Stand on the rail on the balcony, target, and use Zaker. You will have to move a little for a better angle. Battle 2: This is the easiest battle in the game. As soon as the battle begins, switch to Zatch and roll right into Baltro. You win. One little tip though that will help you in the long run. Trees are made of rubber in the world of Mamodo Fury, as any spell that hits one will disappear. So, hide Kiyo behind a tree, and get going with Zatch.

I think you can cast it twice before you lose power. Just switch back to Zatch and run around a bit. In the time it takes to target her, Brago destroys you. Hide Kiyo, Zaker and Zakeruga whenever possible. Also, one of his spells will be a ball on the ground, which will suck you in.

Usually, the camera will angle to them The Yellowtail when they begin to fall, so that should clue you in. Battle 1: RUN. The first spell he casts Usually the spell with flying chains , if it hits, will do a TON of damage. Switch to Zatch and run into the middle of the area.

Repeat this, and try hiding behind other things if Apollo finds Kiyo. His other spells are powerful, so watch out. Blast the smaller rocks with Zaker for health-restoring Yellowtail.

Just let Zatch computer-controlled stay out in the middle, and stay as Kiyo, casting Zakeruga when possible. When you run out of power, switch to Zatch and run around, try to hit Apollo or Rops if possible. If you do hit Apollo, RUN. Rops will immediantly knock you down, and that gives them time to find Kiyo, which is bad.

Battle 2: This is what will make you mad. VERY mad. Both you AND Apollo can cast Ultimate spells now, and for some reason he can do it anytime he pleases. This will take some getting used to, but if possible, knock his book away.

Okay, so repeat part one of the last battle: Hide Kiyo. You start behind a big rock. Just hide Kiyo there behind it, and send Zatch up the hill. Once you get there, Garza The human will either cast the armor spell, or the invisiblity spell.

If they do, switch back to Kiyo and run up the hill. Run up the hill, and try to avoid them on the way up. You may need to use Rashield on your way up. Zaker and Zakeruga will help you win this, and cast Bao whenever possible. A lot. Battle 1: This is just as hard as Eshros "protect the school" battle. Anyway, on to the "fight. REAL brave. One, you can use Jikerdor. Two, try to distract them Using Zaker, Zakeruga, or just by fighting. Three, Just follow Suzy around and cast Rashield.

That can also hurt, as eventually, they get smart and cast spells from behind you. Just like when you protected Tia from Maruss that long time ago, Suzy will tend to run towards them. If you see him or Gustav near the opening After you blast the doors off, use Zaker and knock him outside, and follow. You start out in front of the doors, so just turn around and use Zatch alone since using Kiyo will make him aim towards Bari, and blast the doors.

Be extremely careful, and try to lure Bari back inside. Battle 2: Ah, fun. The good thing in this battle is that Bari gets confused easily. So while controlling Kiyo with a computer-controlled Zatch away from you, use Zaker and Zakeruga. Bari can use his Ultimate now, so be careful.

Hide Kiyo behind that ramp Not in plain view, of course, and send Zatch running out. After you get him far away, switch back and start casting. Feel free to run around as Kiyo, as by this time Bari will have decided on who to hit. Zatch will pretty much take care of himself, but if he does screw up, switch to him and run him back towards Kiyo, follow the beginning of this Hide Kiyo, send him back out. Cast Bao whenever it becomes availible, and you should win this.

Battle 2 - Hit Kido while using Rauzaruk! Battle 1: Dr. Riddles and Kido like to run. Whenever "Koboruk" is cast, RUN. Riddles loves to use his Ultimate Spell whenever he can, so be careful. Whenever you hit Dr. If you can follow all of that, and be quick about it, then you should win. If not, practice makes perfect. Battle 2: People seem to think this is harder than it is. All you do is cast Rauzaruk, switch to Zatch, and hit Kido with a physical attack. Ah, this is where the Thousand-year Mamodo arc starts.

Just run up and smack the book away. Simple as that. It usually takes 4 hits to get it away from him. This guy looks easier than he is. A frog, and an old guy. Simple, right? First off, start running. Almost every spell he has will easily take over half of your health.

When you see a big green ball fly from Byonko, RUN. This will turn into a HUGE green puddle that will take a nice amount of damage from you. Cast Rauzaruk, and send Zatch running. So just put Kiyo as far away from them as possible. Once Rauzaruk runs out, run back to Kiyo as quick as possible, or run as Zatch and gather enough power for Zakeruga. Rauzaruk and physical attacks will win this. Winning Battle 1 is pure luck. Send Zatch running to the right, and hope that this distracts them from Kiyo.

If they attack Kiyo again, you pretty much need to start over. Whenever "Magu Yo-Yo" is cast, take this time to either use Zaker, or attack him physically.

Zakeruga and Zaker do pretty much the same damage. Bao does almost nothing. Follow this multiple times, probably and you should win. Just run around and cast Zaker as much as possible. Nothing else. Keep doing this until you can use Bao, and you win. Just hope that you can use your Ultimate before he can use his. My favorite Mamodo.

Look at her cuteness. Anyway, to the battle. Also, like always, use Bao if possible. You have to fight all 4 "Supreme Mamodo" or "Heavenly Kings" in the Japanese version, one after another. These guys are difficult. These fights are fights Pretty straightfoward. Run around, avoiding his attacks, and casting Zaker. Use Rashield anytime he casts a spell, then keep running. Use Bao, and you win. Pretty much ripped right from the TV Show itself, since you can hear static when either of them talk.

Battle Requirements: 1 Battle - Win! Normally spelled "Belgium," the people that translated decided the "u" was too much in his name, apparently. To the battle! This guy is Depends on your skill. 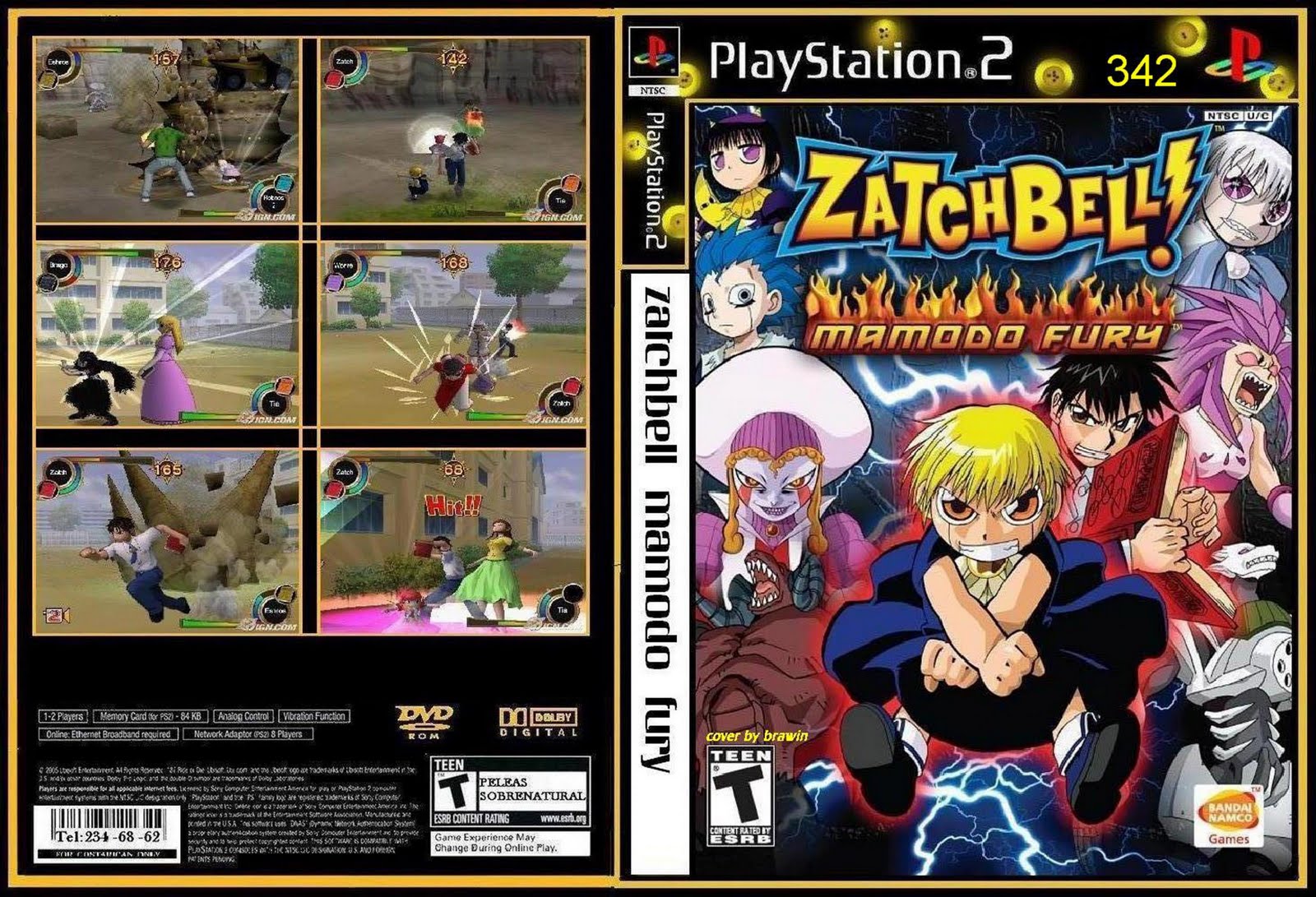